I will never forget dancing around the kitchen after my agent called to tell me that my first book (Dog on a Broomstick, Corgi Pups) was going to be published.  When it came out in 1997 I went into bookshops and gazed at it on the shelves, sneakily pulling it forward or resting it face up in the hope that sales would correspondingly soar.  The book was a real thing I could hold in my hands and at last, I felt like a proper author.

Back then, e-publishing didn’t exist; but Vanity Publishing did.  Not only was it costly to produce your own books, it was very much frowned upon: a pathetic last resort for an author who refused to believe what all their rejection letters were screaming at them.  But things have changed.  For a start we don’t call it Vanity Publishing anymore – it’s been re-branded as self-publishing or indie-publishing.   And quite right too: elitist sneering is something we can all do without.  Self-publishing is a growing hobby, if not an industry.  A few people are making a lot of money out of it.   If you judge success on the number of units sold, as Ben Galley seemed to be arguing recently in The Guardian, then self-publishing has got to be a Good Thing.

Yet most writers would still rather be traditionally published, and who would blame them?  Who wouldn’t want the industry endorsement of their talent, their new baby sitting resplendent in bookshops, a glitzy launch, glowing reviews; their hand aching at book-signings? Who in their right mind would say no to a funded marketing campaign and a team of professionals tweeting and blogging away on their behalf? And let’s not forget the big fat advance and the feature film option.  Well, we can all dream…  Even among traditionally published authors, that’s only going to happen to a lucky few.

So, back to reality.  You’ve spent months, maybe years (don’t even think about the minimum wage) writing a novel that you really believe in; friends and family tell you it’s wonderful and you feel optimistic about your chances.  You send it to dozens of agents and/or publishers, wait for months for responses, receive a load of negative feedback and eventually give up.  It’s easy to despair and feel you’ve wasted your time.  Even easier to rail against those who failed to recognise your talent.

A stack of rejections doesn’t necessarily mean that you’ve written a pile of rubbish.  If you don’t have a literary agent, your novel will land on the slush pile.  It will have to be absolutely brilliant to be picked out and put on a Commissioning Editor’s desk.  Your book may be too similar to something else that’s about to come out, it may not fit into that particular publisher’s list, it may fall into the black hole between literary and genre fiction and therefore not tick enough boxes for the marketing department. If a novel can’t easily be categorised on Amazon then nobody will come across it by chance, which means publicists will have to devote extra resources to bring the book to the public’s attention; in these lean times that’s just not going to happen.

Yes, I know how bad that can feel.  But thinking more positively (and more professionally) what can you learn from the rejections you’ve received?  Are your characters two-dimensional?  Is the plot riddled with logic flaws? Is it unclear what it’s about? Maybe the novel needs another draft, or two or three.  Maybe it needs re-thinking completely.    If you’re going to go to all the bother of self-publishing and then promoting your book, you might as well make sure the content is the very best that it can be.

As a television scriptwriter, I was horrified when an editor came back with virtually no notes on my first draft of a thirty minute drama script.  It didn’t mean I’d produced a work of genius, it meant she was too busy and stressed to spend time helping me make it better.  Criticism is valuable, it’s a gift, a tool that you can use.  So treasure those rejection emails, even if they’re contradictory, which they might well be.   This is all subjective, after all.

Back to my Indie Publishing Experiment.  As it happens, Wendy Cartwright hasn’t sent TO YOU THE STARS… to any agents or publishers.  I’m editing it at the moment and every time I finish a chapter, I say to myself, there’s something about this book, I can’t put my finger on it, but I just love it.  So if it’s so good, why isn’t Wendy touting it around all the big fancy publishers before letting me get my grubby, inexperienced hands on it?

WE DON’T ALL HAVE THE SKIN OF A RHINO

In 1982 (yes, that’s 33 years ago), Wendy Cartwright completed her first novel called ‘Spilt Milk.’  She sent it to one publisher – Heinemann.  David Godwin, who is now a top-flight literary agent at DGA Associates sent her this reply: 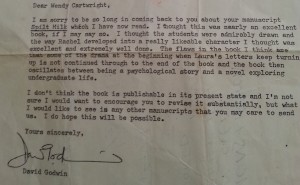 Now a thick-skinned old hack like me would have been jumping for joy to get such a fantastic rejection letter, but Wendy wilted like spinach.  She didn’t send “Spilt Milk” to any other publishers or literary agents.  She packed the manuscript into a box and put it in the cupboard under the stairs.   And even worse, she didn’t write another novel.  Until now that is.

Like a lot of very talented people, Wendy’s self-confidence is a fragile thing.  She doesn’t have the stomach for digesting rejection emails and would rather be digging her garden than spending the day nervously eyeing her inbox.  And that’s fair enough.   Because to be honest, as good as I believe the book is, I suspect TO YOU THE STARS… would receive a load of “sorry not for us” replies from traditional publishers.  These are some of the reasons why:

It’s the wrong length.  Just over 50k words. Too long for a novella but not long enough for a novel.

It doesn’t fit neatly into a genre.  Romance? Possibly…  There is a love affair, between an Astrologer and an Oxford Philosopher but it’s not all the book’s about.  And there are no sex scenes.

It’s witty and funny, but not a comedy.  In fact, some of it might make you cry.

There are no dramatic twists or end of chapter cliff-hangers.  Nor does the Astrologer find herself in jeopardy (unless you count Saturn opposing Mars in Scorpio).  It’s not a plot driven novel.  Hmmm… it might not really be a novel at all.

Well sort of, but not quite.   It’s quirky – beautifully, lyrically written but I wouldn’t call it literary fiction as such.  Good luck with that then, I hear you say.   ‘Sort-of-Literary-Fiction-But-Not-Quite’ isn’t exactly a genre and Amazon’s e-bestsellers are all Mystery/Thriller, Science Fiction/Fantasy or Romance.  But we’re not aiming to join the Kindle Million Club.  TO YOU THE STARS… is unlikely to make Wendy Cartwright a lot of money – that’s not why we’re publishing it.  The book deserves to be shared with a wider audience.  And what better reason to indie-publish could there be than that?

Next INDIE PUBLISHING EXPERIMENT Blog: PREPARATION #2 Editing.  Resources for self-publishers and ways you can DIY.