After many months of editorial to-ing and fro-ing, we have our final draft of TO YOU THE STARS.  It has been proof-read.  It has been formatted.  We can’t wait to upload it to Amazon and start spreading the word.  We’ve bought our domain name.  We have our Promotional Video, ready for You Tube.  But there’s a problem.  We still haven’t got a design for the front cover.

HOW CAN ANYTHING BE SO HARD?

We know what the book’s about, we know what are target readership is.  We can come up with dozens of words to describe the style, tone and atmosphere we’d like the cover to suggest.  But that’s where the difficulty lies.  We are Word People.  And although Wendy Cartwright, the author, also happens to be a dab hand with oil paint and even egg tempura, several days of daubing only yield a batch of this year’s Christmas cards.

As always, we know what we DON’T want.   We don’t want a gravestone, even though an inscription on a gravestone is at the heart of the story. In fact, it gives us our title.  ‘To you the stars, narcissi fields and music.’  Beautiful.  But no, we really don’t want a gravestone; that would be morbid, it might even suggest ‘horror’.  But we do like the idea of stars and narcissi fields (at this point, I discover from Wendy, also a keen gardener, that narcissi are daffodils).

We need a photo, we decide.  A photo will look professional.  So I key in ‘Starry night’,  ‘Starry landscape’,  ‘narcissi fields’  ‘stars and daffodils’ and various other word combinations to Google. I start wading through the thousands of images that pop up, most of which are either inappropriate or not available to purchase.  But there is one.  It’s more of a sunset than a night sky, but there are narcissi – they are even described as narcissi.  We all agree that this photo would make an excellent cover.  We even know the name of the photographer, so surely all we have to do is contact her and buy the image, hopefully for a very reasonable, artist-to-artist price.

Now, who would have thought that there could be more than one professional photographer in the world called Katja Rupp?  There seem to be at least two.  One of them is possibly based in the Netherlands.  Another is possibly based in Switzerland.  Do I want the Katja Rupp that mainly photographs ‘rebellious and animated’ performance artists, or the Katja Rupp that seems obsessed with tennis stars?  Is the Katja Rupp that loves photographing weddings a third photographer or is she one of the others?  Am I in fact seeking one and the same Katja, who has fallen out with the rebellious and animated performance artists, become disillusioned with the world of tennis and now finds happiness in taking photographs of girls in white dresses and cake? Surely, a few messages to ‘info@’ will clear up the confusion straightaway.   But no.  Although there are two possible websites, one I can’t enter at all, and the wedding photographer’s Contact Page sends me error messages.  There is a Katja Rupp on Twitter that photographs landscapes but she last tweeted 18 months ago.  I start to imagine the internet as a massive landfill site of careers that never got off the ground.

Facebook, I think.  She MUST have a FB page.  So, using my husband’s password I log into his account and search, eventually finding the landscape-photographing Katja here too.  She could be a fourth Katja, but I’m sure she’s the one I want.  Not wishing to pose as my husband, I finally do the thing I swore I’d never do.  I sign up to Facebook.  My message to her probably sounds a little more desperate than is wise.  While waiting for her reply, I amuse myself by inviting people I haven’t had contact with for thirty years to renew our friendship.  I exchange several warm messages with some lovely people I had almost forgotten about and decide that Facebook is actually quite fun.  But the weeks go by and Katja doesn’t reply.  Either she is over the FB thing or she didn’t like the tone of my message.  So we give up on the beautiful image of sunset over narcissi fields and start again.

On reflection, maybe a landscape would be too stark, we think.  This is a Love Story (of sorts) and it’s written in the First Person, so maybe what we need is a figure of a woman looking up at the stars.  Even better, let’s have her, back to camera (such women always have their back to camera), looking across the iconic Oxford skyline (the book is set in Oxford), up at a night sky.  Yeah, right.  Try searching on Google Images for that.   And anyway, we’re nervous of another internet wild goose chase; we’d quite like to get the book out by the end of the decade.  So we decide to take our own photo.  After all, Wendy’s daughter is a documentary film-maker and has a really expensive stills camera…

So off go Wendy and daughter Ellie to Oxford, snapping away as the sun goes down behind the iconic Oxford skyline.  Wendy obligingly dons a Fair‘isle woolly beret (the book features a woman with eccentric headwear) and stands with her back to camera.  Ellie sends me the results and I dig out a stick of dried-up Pritt and a pad of A4 watercolour paper I bought ten years ago for an art class I gave up on after two sessions, and set to work.  I use up all my printer-ink, jamming the photocopier, trying every font that Word has to offer, and finally producing my rough ‘Mock Up’.  After all the effort, I’m quite pleased with it.  Okay, so there are no stars, too much grass and the Oxford skyline is so distant and hazy you might not recognise it, but we have something.  About bloody time too.  I scan my rough Mock Up and proudly email it to a select number of discerning friends.  The response is universally negative.  My super-insightful mate Karen, always guaranteed to speak her mind, says “I’m expecting to see some kids in football gear come out from behind her and an overweight gym teach puffing behind with a whistle.” 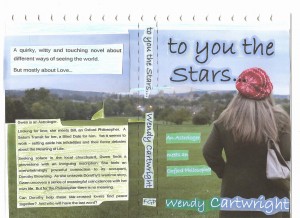 As no football or indeed any kind of physical exercise features in the novel, we go back to searching for an image of stars and narcissi fields on the internet.   Maybe we don’t need a figure after all, we think.  This is not Chick Lit.  This is Accessible Literary Fiction. We find another photo which is even more appropriate than Katja Rupp’s, and discover that this is probably purchasable via a photo library.  But before we commit to the cost, I get out the Pritt stick and the watercolour pad and do rough Mock Up Number 2. This time, I show it to a friend who happens to be a former independent publisher – his publications included a Booker shortlisted novel so he knows his stuff and he understands the agony we’re going through.  Alan doesn’t like the starry sky with daffodils.  The daffs make him think of Marie Curie.  He hates the font I chose for the title.  He thinks we need something more mystical, more arty, preferably with a swirly typeface.  He’s right, of course. Mock Up 2 is so bad I’m too ashamed to share it on this blog.

As my art class didn’t work out and my Word software doesn’t run to swirly typefaces, I give up.  I hand the job over to an experienced marketer.  Within hours, she finds us a proper Book Jacket Designer who offers to do it quickly for a very reasonable fee.  And here it is.  Our book cover.  We love it.  Thank you, Emma and thank you, designer Ana Grigoriu. 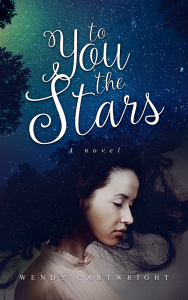 Why the hell didn’t we do that in the first place?

TO YOU THE STARS will be available on Amazon in December – both as a physical and e-book.