Jan: Firstly, congratulations on the publication of your latest teen novel ONLY WE KNOW (Piccadilly Press), sixth in the series set at St. Thomas’ Community College.   I know that before you became a full-time writer you were an actor and a comedian, but have you always been a writer in your heart?

Simon: Yes, definitely.  My Dad was a teacher but he also wrote loads of radio plays, so I got used to manuscripts thudding on the mat, and I remember writing plays when I was a little kid.   Our cat tore up one of my first works and my Dad sat at his typewriter re-typing it for me, and I thought – oh yeah, he thinks it’s important…   At university (Simon studied Drama at Manchester, UK), I’d never have gone – “I’m a writer” – but I did do it, I just didn’t dare show it to anyone.

Jan: Has your previous experience as an actor and a comedian had an effect on what you write about and how?

Simon: Well, the first novel I ever published was about an actor looking after a quadriplegic so it had an effect on the subject matter to begin with – I guess you write about what you know… The main thing it’s helped with is dialogue.  When you act in new plays you get some terrible dialogue so I try to write dialogue that is at least say-able and believable.  I think dialogue informs your characters which means you don’t have to describe as much.  Although sometimes my Editor says, “I like all this dialogue but maybe you’d better have some prose in between.”

Jan: And I noticed ONLY WE KNOW has a dramatic structure to it; the chapters tend to be scenes taking place in a particular space and time.

Simon:  Yes, there’s definitely a scenic structure and some books I’ve even divided into acts – the last one was a five act tragedy (in more ways than one!)   Another thing is that all my books are quite short, which comes from having been a comedian, although I didn’t do it for very long.  I have a terrible fear of being really boring, of being up there on stage and dying.

Jan:  Your first novel,  THE OPPOSITE BASTARD was for grown-ups, but all the rest are teen novels.  How did that transition come about?

Simon: Firstly, it was to entertain my kids. My son was about 10 or 11 years old at the time – all the books seemed to be about teenage spies or teenage wizards and that didn’t interest him that much.  I don’t like fantasy either.  When I read The Lion the Witch and the Wardrobe I loved it until they went through the cupboard, after that I wasn’t interested.  My first novel (COMIN 2 GT U) was about cyber bullying with a 2nd World War back story.

Jan: Your books seem very issue based – are you naturally drawn to those stories or are you writing for the market?

Simon: I wouldn’t like to think of myself as doing “issues” but the reality is that you have to have a selling point every time.  Whatever you do, someone’s done it before you so you’re always a year behind, you can never attempt to chase whatever the current issue is. Early on, I decided to set the stories all in the same school to make it a series, but in fact they’re standalone books.

Jan: In ONLY WE KNOW the central character is a young woman in Year 11, 15-16 years old. But your heartland reader is probably about 13.  So what adjustments do you have to make?

Simon:   The Editor cuts lots of stuff for a start, and I self-censor as well.  They can’t have sex, well they probably can, but off-stage.  Swearing had to go, although I was allowed a bit.  It makes it so unrealistic when I listen to the girls on their way to school passing my window… I’d like to write it more realistically but I can’t.

Jan: The world of St. Thomas’ Community College is also quite soft.  It’s not a gritty, urban world, not that there’s anything wrong with that – the world of your books exists too.

Simon:  Yes, it’s basically a suburban comprehensive school similar to the one my daughter goes to in West Sussex.

Jan:  You mentioned your Editor, how much of a role does she play during the process?

Simon: For this particular book I’ve had two editors.  They say what they don’t like, then I fight for the bits I still like.  Usually they want me to soften things because I’m being too extreme – there’s a perceived idea that your leading character’s got to be likeable and I’ve made them a bit less likeable because I think that’s normal and real.  In this one, I made a few slightly more explicit references to what’s actually going on and they said, “I think we’ll remove some of it.”  And I always cut 5,000 words, whatever.

Jan:  And what about your agent?

Simon:  She did a lot of editing on the first one she sold, got me to change this and that before it went out (to publishers).  I was advised not to make the German character too horrible because then it wouldn’t sell to Germany, which was brilliant advice because it’s my bestselling book by miles in Germany.

Jan:  Do you feel that she’s approachable, if you have an idea for something?

Simon:  Absolutely.  And she’s very good at sending round briefs for various things.  I have more experience of acting agents and they’re certainly very different…

Jan:  We’re all aware that it’s a changing landscape out there in the world of publishing. Given the huge popularity of online platforms like Wattpad, particularly with female teenagers, do you think they still want or need teen fiction written by adults?

Simon: I think they probably do.  I suppose, teenage writers have been one age and you’ve been lots of ages, and that helps.  If you’re going to write a teen novel then the characters are not all going to be teenagers in that book.  Oddly, if a 30-year old writer writes about teenagers in a way they’re more divorced from what’s it like being a teenager today than I am, as a parent of a teenager.  I do try and run everything past my son and daughter.  But I think there’s a place for both.    One of my daughter’s friends writes Lesbian Fan Fiction and she’s got a huge number of followers on Wattpad.

DO NOT READ ON UNLESS YOU’VE ALREADY READ ‘ONLY WE KNOW’ OR DON’T MIND KNOWING THE ENDING! 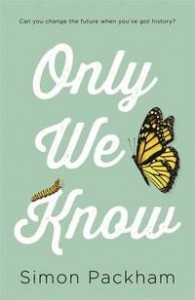 Jan:  Coming back to ONLY WE KNOW…  There’s a massive twist in the novel and you leave it very late, I didn’t guess it at all, didn’t have a clue.  It makes you want to go back to the beginning and read the book all over again.  It works really well, but why did you decide to leave it so late?

Simon: I just liked the idea of leaving it right to the end.  What’s that thing they say? If you leave the exciting bit to the last chapter that makes you however much money, but if you leave it to the last line, that makes you billions of quid!  Obviously, that’s probably not true.  And there are lots of books about this subject where it’s the whole stuff of the book.

Jan: Yes, you’re dealing with the very important issue of Teen Transgender – it’s something a lot of people will be extremely interested to read about, but if you promote the novel through the subject matter you instantly give away the ending.  How is your publisher dealing with that marketing challenge?

Simon:  In the blurb, they do have a line about it being suitable for particular communities but yes, it’s really hard.  I think they are marketing the book to LGBT communities but you don’t want to give the ending away either, do you?

Jan: Why did you decide to write about this subject?

Simon:  First of all I was just thinking about what happens when someone turns up at a new school and sees someone they’ve known from before.  But really the main reason for writing it was that I was at Christmas dinner with my sister and all the family, and this guy was setting next to me, he was in my son’ John’s class at school, and he’s a transgender boy.  He helped me a hell of a lot with research and then my sister is a child psychiatrist so she helped me a lot too.

Jan:  What about your next book?  Will there be more St. Thomas stories?

Simon: I don’t know, I hope so.  I’ve written a new book which my agent thinks is for adults which is a spoof, gothic murder mystery about a 12 year old choir boy.  So we’ll see…

Jan:  Thanks, Simon.  Lovely to talk and best of luck with ONLY WE KNOW and all your future projects.